Yellow Jacket wasps are a major summertime pest. Here are 7 of the top ways to help get rid of them and allow you to eat outdoors again.

You’ve just prepared a beautiful grilled steak (or salmon) and set down to eat outside and you get bombarded. First one, then dozens of little yellow wasps swarm after your food. You try swat them away but they are not deterred. You are getting attacked by yellow jackets.

Yellow Jacket wasps (or “meat bees”) start building their nests in June and soon after start foraging for any meat sources (like chicken, hot dogs, sausages, fish and yes -your steak) to feed their young and grow their nest even more.

How do you get rid of them? Here are 7 ways I’ve found that have varying levels of effectiveness and costs listed from best to worst.

For some regions of Yellow Jacket wasps, you can build your own (or buy) a bait station using the pesticide Onslaught.

A bait station works differently than a trap. Bait stations are small bottles or containers with a bait treated with a delayed-acting pesticide. You take a bait (like chicken or fish), treat it with a pesticide (like Onslaught), place it in a jar and then hang the jar. Yellow jacket wasps grab the bait from the bottle and take it back to the nest where it hopefully can kill the nest.

The only pesticide currently approved by the EPA for yellow jacket bait stations is Onslaught.

Onslaught only works with some sub-species of Yellow Jackets. Fipronil - another pesticide - is suggested as having better results in comments in DoYourOwn and Amazon. However it can be costly since you can only buy a huge portion of Fipronil at a time not currently approved so I am not going to explicitly recommend it here.

Right now setting up a bait station is cumbersome as you need to buy all of the ingredients separately and carefully mix it all together. You can buy a large 20oz bottle Onslaught for $50. You also will need to buy the bait stations containers (which cost about $32 for a set of 4), and bait (say cat food) for $3-$10. You then need to do some calculations and safely extract the right amount of Onslaught in order to make a treated bait that is potent enough to kill the yellow jackets but still small enough to attract them. It comes down to about 0.03 teaspoons per bait station.

The total cost of a gallon of Onslaught + Fipronil + 4 bait stations + bait is about $85 - and you are stuck with about 20 oz of the Pesticide afterwards.

Note: Only some counties offer this service so check with your county ahead of time. Also, for this to work you do need to know the location of the nest.

Yellow Jacket traps are inexpensive and come in many ranges and sizes. You can get a disposable bag trap for $5 or a deluxe refillable version for $15. You can also make your own with a soda bottle. Often the attractant will become ineffective in two weeks so you’ll need to empty the trap of dead wasps and refill it often (which can be both costly and disgusting). The biggest manufacturer is Rescue with about a dozen variations. (Check out our yellow jacket trap reviews for a list of the best ones). 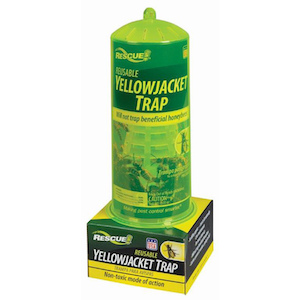 **Traps are not very effective if you have a nest nearby. ** Most traps can get 50-100 yellow jackets before they fill up. This means on average they are only getting about 10% of the yellow jacket population. (The average yellow jacket nest size is 2,000 yellow jackets and usually if you are seeing yellow jacket activity, you have multiple nests within foraging distance.) In fact, the most productive queens will produce more new yellow jackets in one day (200) than you can fill in a trap.

If you do use traps, put them on the border of your property. Do not put them near where you eat or hang out. Traps contain a chemical tgat will attract yellow jackets so if you put them near your outdoor table you’ll just be attracting more Yellow Jackets than you trap.

If you are having an outdoor party and need to reduce yellow jackets one of the best inexpensive solutions is to put a “food decoy”. Open a few cans of tuna fish or cat food and place them between where you think the nests are and where you plan to eat outside. The yellow jackets will stop when they get to the decoy food and bring that back to the nest instead of the food from your party. Make sure to put the decoy at least 100 feet away from where you are eating or they will find your food too.

Note: Using a decoy only works if you know the general location of the nest and have enough space between your table and the nest to put a decoy. It also only lasts a few hours as by then the yellow jackets will have eaten the food or the food will have lost its freshness.

If you have a yellow jacket problem don’t want to deal with the problem yourself you can hire an exterminator to get rid of your yellow jackets. Many pest control services provide a service to help mitigate yellow jackets as part of their per-month service or for an annual fee. They will try to use approved bait stations, identify and kill nests and spray the area with a pesticide and deterrent. From our experience, the cost is about $150 and we’ve had mixed results. Some pest control have had good results getting rid of yellow jackets while others only deter them for a few weeks.

If you know the location of the nest, you can purchase a spray-based pesticide that can spray and kill an entire nest from about 20 feet away. (People have also suggested pouring gasoline and hot water but I think if you are taking the risk to kill yellow jackets, you should pick the most effective thing possible).

This is by far the most dangerous way to deal with yellow jacket nests and the most likely to cause serious injury or death. Yellow Jackets are highly protective of their nests and may swarm in retaliation.

To kill the nest correctly, you get up in the middle of the night when the yellow jackets are least active and completely cover yourself (including your face and eyes) in protective gear. You then find the nest using a flashlight and completely spray the nest from at least 10-15 feet away.

The best time to do this is in the middle of the night when when the temperature drops below 50 degrees and it is too cold for yellow jackets to go outside.

If you do plan on spraying a nest, make sure to prepare a plan for a quick escape into an enclosed area in case the yellow jackets exit the nest and attack.

Many Internet sites propose placing fresh dryer sheets on your table with the thought that the sheet smell will deter yellow jackets. From our experience this maybe deters yellow-jackets for 5 minutes. After that is has no benefit except giving your food a dryer sheet smell.

Some sites suggest hanging inflated paper bags as a way to trick wasps into thinking another nest is nearby. This may work with hornets who have nests in trees. This does not work at all with yellow jacket wasps who have nests underground. It will not prevent them going after your food.

A number of sites have suggested using Lemongrass, Spearmint, Lavender and other strong spices to deter the yellow jackets. Some sites say lemongrass contains citrenella - a mosquito repellant and that planting live lemongrass may help deter wasps. This is only marginally effective and will not stop them if there is enough meat nearby.