If you have a problem with Yellow Jacket wasps, you probably are researching ways to get rid of them. Two of the most common ways are hanging up either Yellow Jacket Traps or Yellow Jacket Bait Stations. Here’s a comparison on both. But first some background.

What are Yellow Jacket Wasp Traps?

Yellow Jacket traps are contraptions you can buy or build that trap and collect Yellow Jacket Wasps and other wasps such as Hornets. You can think of them as mini prisons. A trap usually is about the size of a 2 liter bottle of soda (in fact you can make one out of a 2 liter bottle of soda!). It has a bait or lure to attract yellow jackets, multiple holes for yellow jackets to enter the trap and a mechanism to permanently trap the yellow jackets inside once they are inside. Many traps have megaphone-shaped tubes for holes that are easy to enter and hard to exit and soapy water at the bottom where the wasps get stuck and drown. 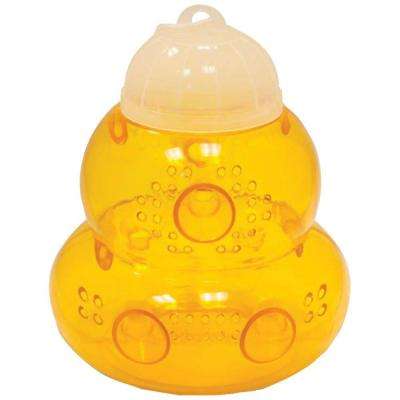 If successful the trap will lure the wasp inside where they will find it difficult to impossible to escape. You can see the success by seeing dead yellow jackets pile up or live ones frantically trying to escape/ A successful trap will trap hundreds of yellow jackets over the course of a few weeks. 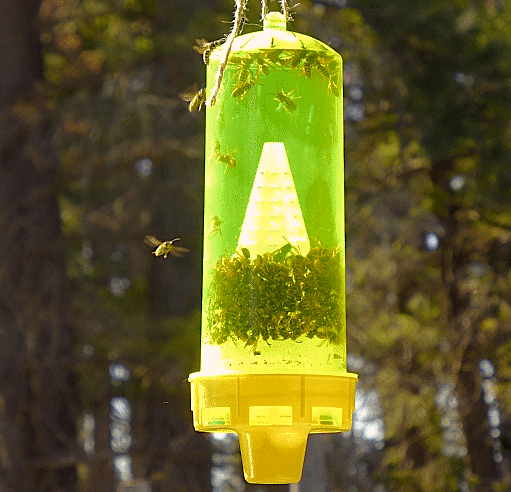 Pro’s of Using a trap:

Cons of using a Trap:

What are Yellow Jacket Bait Stations?

Unlike traps, Yellow Jacket bait stations do not try to trap wasps inside a container. Instead they can destroy a nest from afar using a container that holds a bait treated with a very small amount of insecticide (usually drops of an already diluted delayed-action insecticide like Onslaught mixed into a protein like chicken or fish). 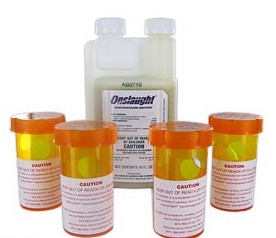 To activate a yellow jacket bait station, you mix together the meat and insecticide and hang it (like you would a trap).

Once hung and activated, Yellow Jacket Wasps enter the bait station, grab the treated bait and then exit the container, taking the bait to their nest. Since the insecticide is delayed, the yellow jacket may enter and exit the bait station multiple times before the poison starts taking effect. Eventually the yellow jackets inside the nest (including the queen and larvae) feast on the treated meat and are killed by the insecticide.

When used effectively and if close enough to the nest, one bait station can destroy an entire nest of yellow jackets in 48 hours.

Unlike traps, bait stations are smaller and are removed after a few days. You therefore do not have to see bags/bottles of dead yellow jackets nor empty/deal with yellow jacket carcasses.

Bait stations do have their limitations:

First, unlike traps, bait stations do use insecticides. However, while a bait station uses insecticide, in almost all cases, the insecticide specifically targets mechanisms that occur naturally in insects and not mammals. Also, the bait station is hung inside a container for a few days and then removed and disposed of so the risk of exposure is pretty low.

Second, the only pesticide approved to be used in bait stations, Onslaught, is effective only for certain sub-species. In particular, it does not work well with Yellow Jackets in the west coast.

Here are the full pro’s and cons:

You now know the differences between traps and bait stations. So which should you use? If you have a bad yellow jacket problem where the wasps are coming after your grilled food and you just want it to go away - use a bait station. It is the most effective way to get rid of the wasps. We also recommend using a bait station if you have kids and really don’t want them to be stung.

If you have a minor problem, are looking in October, or really care about only having organic solutions, use traps. They might not get rid of your problem but they’ll help reduce the population and at least you can count how many you’ve killed.